Pufferfish (or blowfish) is considered a delicacy in East Asia; it’s also one of the most poisonous vertebrates in the world.

There’s quite a fancy restaurant in I-dong near the city hall that serves pufferfish, you can get either standard dishes to share or you can set menus which are probably better for special occasions.

We got pufferfish bulgogi which was grilled pufferfish in a spicy sauce with noodles. It was quite good it was tasty fish even with quite a powerful spicy sauce. This is also a low-risk dish for getting poisoned from (the higher risk dishes are blowfish soup and blowfish sushi). It’s a touch on the expensive side, we got probably the most basic dish and it was about 20k.

I would give it three stars for the food and an extra star for the nice interior and the novelty factor. If you want to give it a go it might be worth looking up the dishes in Korean first because there is no English menu. 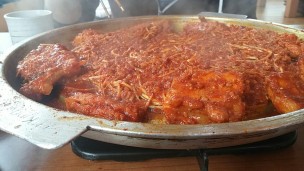 One thought on “Pufferfish Bulgogi”